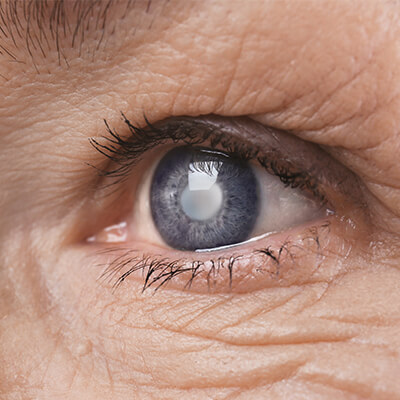 A cataract is formed when the natural lens of the eye, responsible for focussing light and producing sharp images, becomes cloudy and hardens, resulting in a loss of visual function.

A cataract is painless and usually develops gradually over several months or years. Normally, the onset of a cataract in one or both eyes may cause decreased night vision, impaired depth perception, and increased color distortion.

The cause of cataract formation is unknown, but scientists do know that a chemical change takes place within the lens of the eye with age. Cataracts are a part of the normal aging process, affecting 80 percent of people over age 60 (although not all cataracts are due to age). In fact, some babies can be born with cataracts, while some people develop them as a result of injury, prescription medication use or other causes.

Though none of these symptoms necessarily mean you have a cataract, if you experience one or more, you should have your eyes examined by an optometrist or ophthalmologist.

The only treatment for a cataract is surgical removal.

Years ago, when cataract surgery was less successful than today, cataracts were often not removed until the patient was almost blind. With advances in cataract surgery and intraocular lens (IOL) implants, it is no longer necessary for patients to wait until vision is severely impaired. Today, cataracts are usually removed at the point where visual impairment interferes with the daily activities of living – such as driving a car or reading.

Thanks to advances in microsurgical techniques, cataract surgery is performed without complications in more than 98 percent of cases.

Cataract surgery is performed using the most advanced microsurgical techniques typically on an outpatient basis. The actual procedure usually takes between 8 and 30 minutes, depending on the severity of the cataract. 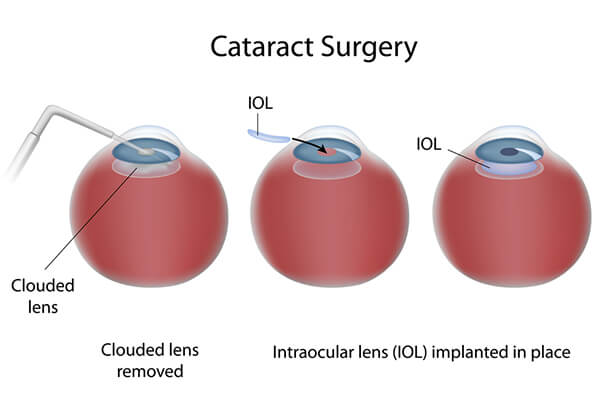 The cataract removal is performed under a specially designed, high-powered microscope. The most common method of removal is called “phacoemulsification,” where a small incision is made near the outer edge of the cornea and the cataract is removed by dividing it surgically and then emulsifying it with ultrasound waves. The lens capsule is left in place to support the Intraocular Lens (IOL) implant. At a later time, the capsule behind the IOL implant may become clouded. This is known as a “secondary cataract” and may be treated by the use of a laser.

An intraocular lens is used to replace the human lens in more than 95 percent of cataract patients. The IOL is usually implanted at the same time as cataract removal. The lens is typically implanted behind the iris, the colored portion of the eye, and cannot be seen. This is the natural position of the human intra-ocular lens. The incision is self-sealing without the need for sutures. However, there are times when fine sutures are needed to close the ocular incision.

It is possible for an IOL to be implanted in a patient who has had a cataract removed in a previous surgical procedure. This is called “secondary IOL implantation.”

The first IOL was implanted in 1949 by an English ophthalmologist, Harold Ridley. Since then, many advances in IOL design have occurred. Today, IOLs may be made from a plastic called polymethylmethacrylate (PMMA), silicon or an acrylic material, which has been found to be most compatible with the delicate tissue of the human eye. The latter two can be folded and inserted through a small sutureless incision.

Ask us a question

© 2018-2023 All Rights Reserved. Healthcare Website Design by Glacial Multimedia, Inc.
If you are using a screen reader and are having problems using this website, please call 412-572-6121